Beyond Anno Domini… To the Gracious Year of the Lord / Fr. Dr. K. M. George 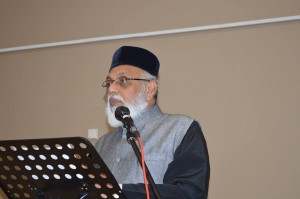 In the closing months of the year 2015 the world celebrated the hundredth anniversary of Einstein’s General Theory of  Relativity. Most people even in the discipline of physics do not claim to understand  fully the intricacies of the concept and mathematics of that theory. Yet it has been hailed as one of the greatest scientific theories regarding our physical universe. Time and space had been considered as unchangeable absolutes in Newtonian physics until Einstein who made clear that they are relative  phenomena depending on our position and speed.

Long before Einstein, wise persons in human history had intuitively known that there was nothing absolute in our created universe, and that all our perceptions and measurements were relative to one another. In this sense any intelligent person can understand some of the  practical and philosophical implications of the principle of relativity. Yet in human history religious and political-ideological systems were too often inclined to assert some of their claims as absolute to the detriment of human peace, social harmony , well being and genuine progress. Calendars and counting of time were among  those absolutes aggressively upheld by the dominant powers.

The Gregorian calendar has now become the civil calendar of almost all nations in the world. It is not, however, accepted by all churches. The Eastern Orthodox churches still follow the Julian calendar for the  ecclesiastical  feasts, Easter being  the most important of all. The dates for Christmas and the new year are not, therefore, the same for all Christians in the world though we take it for granted that the new year begins with the first day of the month of January according to the civil calendar.

Calendars are closely linked to historical and cultural events or personalities in a particular civilization or large cultural-geographical  grouping. All ancient civilisations have their own systems of reckoning time. The Julian calendar associated with the Emperor Julius Caesar in 46 BC and it is reformed version the Gregorian calendar associated with the Roman Pope Gregory in AD 1582 are sometimes called Christian calendars following the fixing of the year of the birth of Jesus Christ by Dionysius. In fact they are a Roman imperial calendar, later called Christian and western. Because of the broad reaches of the Roman imperial power over Europe, west Asia and north Africa and then the massive emergence of Western colonial empires holding the entire world under their sway, the Roman calendar became normative for the whole world. All other systems including that of the ancient Mayan culture were either obliterated or suppressed.

Sensitive and discerning persons had already anticipated a conflict of cultures and of  calendars in the post colonial period when religions like Hinduism and Islam gained a new awareness of their identity. In India for example we have several regional systems of calendars that are all sidelined in favour of the Gregorian calendar during colonial times.

Anno Domini is thus associated in the minds of many with the imperial colonial domination of the West during the last 500 years or so. Hence it is quite natural that some  reactions set in. It is in this sense that we think of moving beyond AD to the gracious year of the Lord that  Jesus announced at the very beginning of his public ministry. He had in mind the Jubilee year in Leviticus 25 and the prophetic vision of the messianic era as foreseen by the prophet Isaiah. Neither the Jubilee nor the Messianic era in their  pristine  sense had  imperialistic undertones. On the contrary the  heart of this new understanding of time and space was a radically new  liberative vision that went against the grains of any project for empire building or oppressive authoritarian rule.

Jesus’ reading of the Scripture aloud in the synagogue of Nazareth at the very  beginning of his public ministry made it very clear to all that his mission was ‘to preach good news to the poor, to heal the broken hearted, to proclaim release to the captives, recovering of sight to the blind, to deliver those who are crushed and to proclaim the acceptable/gracious year of the Lord’ (Luke 4:18-19).

Here is a refreshingly new interpretation by Jesus of the promising  but cleverly manipulated and ritualised Jubilee tradition of the Jews. Christ gave us  a thoroughly bold and  alternate understanding of time, space, history and human responsibility based on justice, openness, liberation, grace, freedom and compassion. The Christian Church in its mission in the 21st century needs to follow this line of the acceptable/gracious space and time gifted to us by God through Christ and not that of the imperial and colonial calendars that became symbols of oppressive power exploiting the poor, crushing the weak, blinding and marginalising the masses, and enslaving and incarcerating large sections of humanity in the trap of consumerism.

Despite all odds, let us  celebrate and welcome the New Year with a heightened awareness of what Christ brought to us in terms of the Lord’s year of grace, peace and justice, friendship and hospitality, love and compassion. Blessed New Year to all.