‘Other’ Orthodox have low expectations for ‘Great Council’ 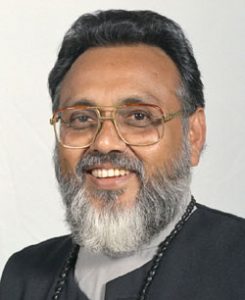 ‘Other’ Orthodox have low expectations for ‘Great Council’

As the “Holy and Great Council” of the Orthodox Church gets underway in Crete amid defections by several churches, most notably the Russians, there’s a whole other Orthodox family that was never going to be part of the action in the first place.

The Oriental Orthodox Churches, which broke with the Eastern churches such as Constantinople as early as the fifth century, are comprised of six independent bodies:

Together, they represent some 84 million faithful and are among the oldest Christian bodies in the world.

As a result of the rupture, the council in Crete was never going to be truly “pan-Orthodox,” in the sense of embracing all the Orthodox churches of the world. Although representatives of the Oriental churches have been invited as observers, they’re not voting members.

In this interview, the Rev. Dr. K.M. George, a priest of the Malankara Orthodox Syrian Church in India and principal of the Orthodox Theological Seminary in Kerala, India, reflects on the council and its prospects.

“Humanly speaking, one cannot expect much from this synod,” George says, “but we believe in the power of the Holy Spirit who can guide us at all levels.”

George also insisted that the “Holy and Great Council” can’t be compared to the Second Vatican Council of the Catholic Church, because each Orthodox church is independent and there are forces within those churches that may resist whatever the council adopts.

“The problem in the Eastern Orthodox Church is that the conservative groups, particularly those in the monasteries of Mount Athos – around 20 monasteries for the last 1,000 years – hold on to a very fundamental understanding of Christianity,” he said.

“Everyone who is outside the Orthodox Church is heretical, according to them,” George said.

The interview was first published by Light of Truth, a publication of the Archdiocese of Ernakulam, Kerala, and appears here with permission.

There is a Holy and Great Council of Orthodoxy scheduled to meet at the Orthodox Academy in the Greek island of Crete from 16 to 27 June 2016. Are you invited to that Council?

George: In fact, this is a Council or Synod of all the Churches belonging to the so-called Eastern Orthodox traditions such as the Greek Church, Russian Church, Romanian Church and so on. This is called the Eastern Orthodox family of Orthodox Churches.

We also have the Oriental Orthodox family, which includes the Coptic Church, Syrian Church, Armenian Church, Ethiopian Church and Indian Malankara Church. We belong to a different family of Orthodox Eastern Churches and, as we agree with the other families in almost all things, we have come to a fresh agreement that we hold the same apostolic faith.

Now, the Synod, which is called the Holy and Great Holy Council, in fact divides the Oriental Orthodox as one separate family.

We will be invited [as observers], and I suppose the Roman Catholic Church is also invited. But I understand that the invitees are free to attend the first ceremonial opening and the final ceremonial conclusion. The invitees will not participate in the discussions or deliberations of the Synod.

I am personally very close to some of the people who are in the Council. I am not going for the Synod, but I am closely watching its outcome.

Do you think that there is a substantial disagreement on Christological problems between these two families?

For 1,500 years we were separated because of the Christological disputes, but, in the 20th century, an unofficial meeting of theologians from both sides and an official meeting of the Churches that followed have come to an agreement that we hold the same apostolic faith and tradition and spiritual and liturgical understanding, but cultural and political interventions and terminological differences – the Greek language was the basic language at that time – created the division.

So, we want to come back to the Eucharistic communion, and that is the present understanding. In fact, the Christological disputes are settled theologically, but practically the Churches have to take a decision on restoring Eucharist communion.

There are ten points in the agenda for discussion. Perhaps the first point is the diaspora, which means a majority of the Orthodox people are not in their own lands and they are very much spread all over, especially in Europe and America. These migrants in different parts are exposed to Western culture. Do you think that the proposed Synod is going to seriously look into some sort of an adaptation or inculturation, similar to what happened in the 1960s in the Catholic Church after the Second Vatican Council?

We cannot compare this Synod with the Second Vatican Council and its impact as it took place within one Church, which is officially called the Roman Catholic Church, which also has its Oriental rites.

Here we are dealing with some 14 autocephalous (self-headed) Orthodox Churches. They are all independent Churches in matters of jurisdiction and administration etc., linked only in one Orthodox faith, liturgy and spirituality. What binds them is only the same faith in Christ and the same Eucharistic communion, and not in administration or in jurisdiction.

So this cannot be compared with the situation of the Roman Catholic Church where you have one universal head in the bishop of Rome. Here you have autocephalous Churches. For example, the Russian Orthodox Church has its own Patriarch, the Romanian Orthodox Church has its own Patriarch and, while they have no jurisdictional connection, they have only one faith. Therefore, this Council is very different in terms of its Synodal procedures.

The diaspora is an important and vital issue for the Council, because the people who have emigrated from the geographical area of their mother Church are living in new cultural and political situations. There is a question of jurisdiction, and that is what they are concerned about.

For example, the Russians who live in America or the Greeks who live in Australia have become completely naturalized citizens of those countries and among them there are many Greeks who do not speak Greek, there are Russians who do not understand the Slavic language. So the question is, what would happen to them in terms of jurisdiction and affiliation to the mother Church? That’s a major issue for them.

In spite of being different Churches under different heads, they all come under one tradition and one Orthodoxy. There could be decisions which could be taken together and some good will can be created among them. That kind of good will could help them also to practise certain things commonly, don’t you think so?

So, this is a major question that creates tension among the Patriarchates of the Christian Orthodox Church. For example, the Church in America is called the Orthodox Church in America (OCA), and is purely an American Church where English is used in the liturgy and in the theological seminaries. They are all American citizens, but people in that Church originally came from Russia or some other East European countries.

What do you expect from this Council?

Personally, I don’t expect much, because it’s taken almost fifty years to prepare this Great and Holy council. After the seventh ecumenical Council in the eighth century, they never had an ecumenical Council of the whole Church. In the Western tradition, the Second Vatican Council is the 21st Council and in the Eastern tradition they have only eight Councils. In our Oriental Orthodox tradition, we have only three Councils which are Nicea, Constantinople and Ephesus.

According to an earlier understanding, this Great and Holy Council should take up the issue of the Eucharistic communion with the Oriental Orthodox Churches. But I don’t know to what extent that will appear in serious discussions at the Council, because time is extremely short and the agenda is very big. It is likely that there will be tensions between the Moscow Patriarchate and the Ecumenical Patriarchate of Constantinople.

So, as I said, I’m not expecting much from it, but the fact that it is happening today after 50 years of preparation is in itself something positive. I hope that something good will come out of it.

Do you hope that this Council could at least envisage the possibility and openness to convene a Synod in the future of all the Orthodox Churches?

In principle, a Council of all Christian Churches, including Orthodox and Eastern Oriental Churches, is a good idea, but few individual theologians and bishops in the Orthodox Churches speak about it. I don’t think this is going to happen in the near future. Even the very idea about it will not be accepted.

The problem in the Eastern Orthodox Church is that the conservative groups, particularly those in the monasteries of Mount Athos – around 20 monasteries for the last 1,000 years – hold on to a very fundamental understanding of Christianity. Everyone who is outside the Orthodox Church is heretical, according to them.

Do you think that they are verging on some sort of fundamentalism?

It may be so. The problem with the hierarchies of these Orthodox Churches is that they are quite open. I know them personally. They have to handle these monastic circles and other radical groups.

In the proposed Synod, unless they please these radical groups to some extent, they will not succeed, because of a process called “reception.” The Council can make decision, but the process of reception is very significant. The local churches, parishes and national churches and monastic circles will have to receive the decisions of the Council, and that may take some time and some very strategic pastoral actions also.

Unlike in the Roman Catholic Church, where what is decided by a Synod under the leadership of the bishop of Rome is accepted, in the Church here, there is the course of reception. The decision is one thing, and reception is yet another thing.

In the Council’s agenda there is a topic called Orthodoxy and the ecumenical movement. From what you said and as far as I know, the Mount Athos monasteries are terribly against ecumenism, aren’t they?

You are right. Here, in this agenda of ecumenism, actually comes the Oriental Orthodox Churches and Roman Catholic Church. They are not actually meaning the ecumenism of the World Council of Churches. Basically, their relationship is with the ancient churches of both the Orient and the West. So, I am not sure to what extent they will come to a fruitful conclusion.

Humanly speaking, one cannot expect much from this Synod, but we believe in the power of the Holy Spirit who can guide us at all levels. The very fact that these Churches are coming together for this Synod after 50 years of preparation is something great in itself and should be seen as guided by the Spirit of God.

Christianity is also facing terrible difficulties in the modern world. If you look at the Eastern European Church, Marxism has practically demolished it. In the Western world, the capitalistic consumer system also is decimating Christianity. In the given context, don’t you think the Christian Churches should come together and think together for the hope and future of Christianity, rather than engaging in power struggles, which were traditionally a terrible curse for the Church?

I think you have raised a very good question. Personally, I believe that the Christian Churches all over the world should adopt a new paradigm, because we have been working under the age-old paradigm of identity, division and mutual rights.

I personally believe that Pope Francis has a unique vision, although some people would say that he is too idealistic. He has a new vision of Christianity. I think he is going back to the original gospel message. So we need to have a new paradigm of Christianity to live in the present world.