The Colours of Violence: Speech by Fr. K. M. George 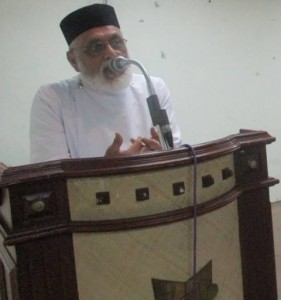 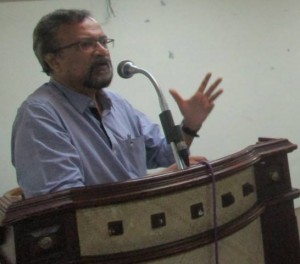 “The Colours of Violence” is surely an interesting formulation of social analysis by SUDHIR KAKAR, an eminent social scientist with psychoanalytic passion. Rev. Fr. K.M. George delivered his 41st Lecture on this theme in the Sukumar Azhikode Lecture series today at DC Books Auditorium, Kottayam. Kakar’s thesis had generated considerable interest in the psychoanalytical framework of understanding communal riots in India, way back in the early 1980s.

Fr George reminded us that it was an extended case study of Kakar on the Hindu-Muslim riots in Hyderabad in 1990, sparked off by the Babri Masjid-Ramjanmabhoomi conflict. Situating the theme in the general context of seeing/understanding religions as ‘the problem’ by many, Fr George had drawn our attention to Kakar’s argument that it is in such situations of conflicts that new Muslim, Hindu, and other identities are created – identities much less tolerant of others and productive of the kinds of psychological projections that foster communal violence and intolerant religious fundamentalism. Kakar himself concludes: “what we are witnessing today is less the resurgence of religion than (in the felicitous Indian usage) of communalism where a community – of believers not only has religious affiliation but also social, economic, and political corresponding interests of another community of believers sharing the same geographical space.”

Kakar surely studied cultural stereotypes, religious antipathy, ethnocentric histories, and intermittent violence to map out the development of both “Hindu and Muslim” psyches. Kakar says that in early childhood the social identity of every Indian is grounded in traditional religious identifications and communalism. Together these bring about deep-set psychological anxieties and animosities toward the other. For both Hindus and Muslims, violence becomes morally acceptable when communally and religiously sanctioned. As the changing pressures of modernization and secularism in a multicultural society aggravate this deep-rooted communalism, and as each group contests for power, ethnic-religious conflicts explode. Fr George succinctly depicted how “The Colours of Violence” speaks with eloquence and urgency to anyone concerned with the clash of religious and cultural identities.

Tomorrow’s theme of Lecture is Hannah Arendt’s “Banality of Evil.”