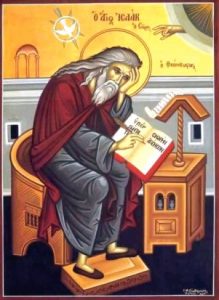 A Ramban or Rambachen as they are called respectfully and affectionately in Malayalam, is a priest-monk (hieromonk). The word is derived from Hebrew Rabbithrough Syriac Rabban meaning ‘our teacher’. So he is considered to be a spiritual teacher – learned, disciplined and fully committed to ascetical practices.

In India in the Malankara Orthodox Church a Ramban, that is an ordained priest-monk, is given a black hood or a head-veil (called masnapsa in Malayalam) with 13 small crosses embroidered on to it. He normally wears a black cassock in public.

But in the Syriac Orthodox Church of Antioch in the Middle East every monk and nun is given a hood or Eskimo dotted with 13 crosses at the time of their monastic profession, and they are clad in black like other clergy. They can be simple laypersons or subdeacons. So a priest-monk (Rabban) and a simple lay monk (dayroyo) in the Syriac Church in the Middle East cannot be distinguished from each other on the basis of their dress code . Both wear similar hood and black tunic.

A Monk or dayroyo is a Christian who accepts the monastic way of life, and belongs to a monastery (Dayro) or a congregation of monks. As he is not necessarily an ordained person, Monkhood is not an ecclesiastical position like that of a priest or bishop, but is a state of life or calling dedicated to prayer and ascetic practices.

When a Christian, man or woman, lay or ordained, accepts the monastic way of life, he or she is admitted to either a particular monastery or to the monastic order in general. Some say all monks including the Rambans in the Syriac tradition enter the order of St Antony, the third century hermit in the Egyptian desert. Unlike in the Roman Catholic Church, the Syriac tradition does not have various orders known by the name of its founder or by the name of the particular congregation like, for example, the Benedictines and the Franciscans, the Jesuits and the Carmelites. In the Orthodox tradition monks are distinguished generally by their belonging to a particular monastery or Dayro . Irrespective of their belonging to a particular monastery they all follow the canonical discipline of the church like regular prayer of the Hours, the Eucharistic celebration, and the rules of fasting. Unlike in the Roman Church there is no substantial distinction regarding the spiritual discipline of different monasteries in the Orthodox Church. There may be slight differences in emphasis with regard to their work and style of life. In some houses they run schools and colleges, and their monks and nuns are involved mostly in educational mission. In some others they put stress on social work and running of houses for the orphans, the aged and the disabled.

In public worship where rambans and other priests are present, the lead role in conducting the prayer usually goes to the senior priest, married or celibate.

The bishops also wear the black hood ( masanapsa) with 13 embroidered crosses, but it is not originally part of the episcopal vestment. They wear it because in the Syriac tradition both in the Middle East and India, every bishop is chosen or elected from among the monks in principle , and since every monk or Ramban takes a life-long pledge to follow the monastic discipline, every bishop is bound to wear this head veil as a token of his commitment to his Dayroyuso, monastic state. If a celibate priest is elected to be bishop, he is first made a Ramban before his episcopal consecration.